Thingsat is ready to take off

Barely a year after Amicalsat, the CSUG is preparing to launch a second device into orbit aboard the Stork nanosatellite. 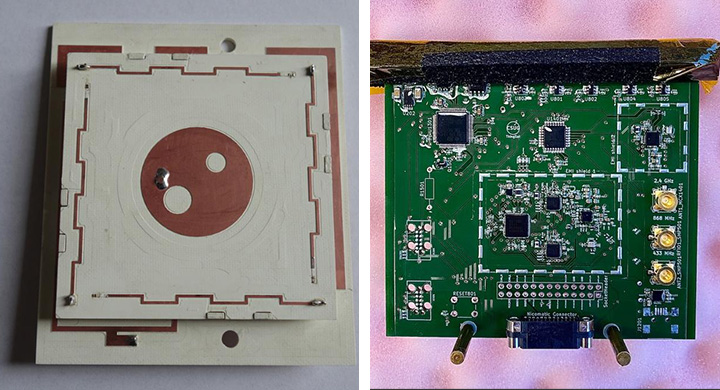 After the successful launch of Amicalsat in September 2020, the CSUG is preparing to launch another object into space. In June this year, a communication device for the Internet of Things developed in Grenoble will be launched aboard a Space X rocket from Cape Canaveral. “Instead of making a satellite for this project, we bought a place on the Stork nanosatellite, developed by Polish company SatRevolution, which will transport several other devices besides our own,” explains Mathieu Barthélémy, Director of CSUG. “This offers the advantage of being much less expensive than if we had developed a full nanosatellite”. The device, which will be launched in late June, is a radio communication module based on a low-speed and low-power wireless communication protocol developed in Grenoble (LoRa by Semtech). Its total volume is 300cm3 including its aerial. The device, called Thingsat, provides communication with isolated objects on Earth’s surface such as buoys at sea fitted with sensors to measure water level or temperature. “The solution offered by Thingsat involves a device that receives information when the satellite passes over the buoy and then transmits the collected data when it passes over the research centre concerned”.

The CSUG developed the electronic module and ensured it was compatible with the conditions encountered in space in collaboration with LIG**, l’IMEP-LAHC***, Institut Paul Emile Victor and Université de Polynésie. Several industrialists have joined the project, including Air Liquide which is interested in Thingsat for recording the positions and pressure levels in gas containers on ships at sea.


The project in the midst of the health crisis


The project was carried out entirely remotely and involves several students and staff from Grenoble INP. Despite the restrictions due to the health crisis, it was completed on schedule in the space of 18 months: the flight model was delivered and the device was subjected to vibration testing before being integrated into the nanosatellite, which will be sent to the launcher in the coming days. To start with, tests will be carried out to check the functionality of the device before concrete collaborations with industrialists are set up.

Other projects are already in the pipeline. In 2022, the QlevEr Sat nanosatellite, developed thanks to the support of Teledyne e2v, will allow deforestation to be monitored thanks to an imaging device and on-board image processing system using artificial intelligence. In 2023, ATISE will be launched into orbit with a spectrometer for studying aurora borealis.