Collaboration is the key to creating social robots

By definition, robotics is a multidisciplinary science. To breathe life into a robot, scientists must collaborate  on creating a physical machine that includes mechanics and software. Together, they can infuse robots with the ability to perceive, move or communicate. A companion robot is a type of machine that necessitates particularly close collaboration between those who build its physical body and those who provide it with behavioral and social capacities.
Grenoble INP's ecosystem unites many of the skill sets needed to create social robots. In addition to its researchers, the university can count on experts from surrounding universities who are specialized in human and social sciences. As a result, numerous initiatives have been launched to foster ties between various actors in the field of robotics.
Thanks to support from the PERSYVAL-Lab, collaborative efforts such as the Robots in HUMan environments team (RHUM) aim to unite players who contribute to robotics design. The CNRS has also supported the development of the Robotex team which brings together 15 French robotics laboratories and five national platforms to cover humanoid, micro and nano, medical, mobile, and production robotics.
In addition to these teams, networks such as fabMSTIC, led by Jérôme Maisonnase, create an environment in which creativity can blossom. These workspaces facilitate exchanges between students, researchers and industrial players. They also provide support for Ensimag's fab lab and other innovative projects. The Grenoble INP Foundation, Ensimag and the Laboratoire d'Informatique de Grenoble (LIG) have also launched the Robo'ethics chair to promote social robotics.


Patrick Reignier, Professor at Grenoble INP – Ensimag and a researcher at the LIG 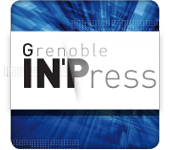