The search for the ideal battery

Renaud Bouchet, professor at Grenoble INP – Phelma and researcher in the LEPMI (Laboratory of Electrochemistry, Physics and Chemistry of Materials and Interfaces), has just been granted the EDF Pulse Award in the Science category. 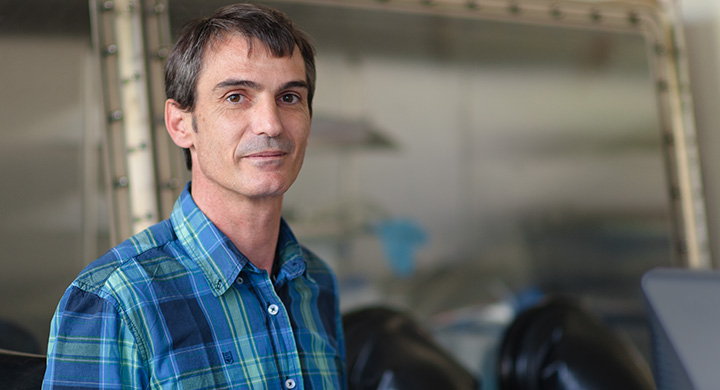 The work performed in collaboration with a team from the Radical Chemistry Institute of Marseilles (France) on solid electrolyte lithium batteries allowed Renaud Bouchet to win the race against leading international teams and be endowed a sum of EUR 150,000 to carry on his research work.
Grenoble INP researchers are definitely on the leading edge as regards lithium ion batteries! After Rachid Yazami, engineer and doctor of Grenoble INP, who was awarded the Draper Prize of the National Academy of Engineering (NAE) in January 2014 for his essential role in the development of the first rechargeable lithium ion batteries 30 years ago, it is now the turn of Renaud Bouchet, professor at Grenoble INP – Phelma and researcher in the LEPMI (Laboratory of Electrochemistry, Physics and Chemistry of Materials and Interfaces) to be rewarded in this field. Renaud Bouchet’s work paves the way for the development of a new generation of lithium ion batteries that will be able to store a large quantity of energy and allow electric vehicles to become widely used.

Lithium-ion batteries are used everywhere in our modern devices, but they have now reached their limits. In particular, they do not allow the automobile industry to make vehicles that would simultaneously offer high power, an operating range comparable to that of petrol engines, perfect safety and all this at a reasonable cost. Furthermore, since the “ideal battery” still does not exist, storage is the problem that limits the development of renewable energies.
Renaud Bouchet started his search for the “ideal battery” with the Copolibat project while he was still working in the Madirel Laboratory in Marseilles (France), then he continued in Grenoble with the Copolibat 2 project and then finally joined LEPMI in September 2012. The SIEL (Single-Ion Electrolyte) project is along the same lines as these projects supported by the French Agency for Research. It brings significant progress in the development of a new type of batteries and earned Renaud Bouchet to be selected by EDF to receive the EDF Pulse prize. Renaud Bouchet, who leads the SIEL project, explains: “The key idea of our work is to replace the liquid electrolyte in lithium batteries with a solid electrolyte. The electrolyte is the substance which simultaneously separates the two electrodes and allows the electric current to flow, and it would be much more stable - and therefore less dangerous - if it were in solid state rather than liquid state. Moreover, this would make it possible to reduce the cost of batteries while improving their energy density. But for that purpose, we needed to find the material that had the required characteristics.” Although all technological issues have not been solved yet, the aim of the SIEL project is to take up the challenge and produce industrial prototypes of batteries within the next couple of years.

The solution lied in cleverly designed “block copolymers”. Renaud Bouchet explains: “When two types of copolymers are bound in the same macromolecule by a covalent bond, the copolymer is called a ‘block polymer’. These usually immiscible polymers - or blocks - lead to a nanoscale phase separation organised on a long length scale which gives materials with properties that are a synergy of the characteristics of each block. We have designed copolymers in which one of the blocks is made of anions in equilibrium with the free and mobile Li+ ions of the other block. As a result, anion displacements likely to cause differences of concentration that will limit the battery power are avoided.” Fixation of anions on non-conductive blocks provides the whole material with very interesting physical properties in terms of stability, mechanical strength and conductivity.
In addition to these remarkable properties, the big advantage of these copolymers is that they can be produced using eco-compatible (i.e. without organic solvents) aqueous phase synthesis processes and can be kept at ambient atmosphere. They are formed with conventional plastic material processing methods such as extrusion, lamination, etc. As these materials are polymers, they can be produced in very thin flexible sheets that will be easy to integrate into a battery.

The creation of a lithium metal energy storage cell is another possibility introduced by this innovation. Renaud Bouchet explains: “Indeed, metallic lithium is the ultimate negative electrode for a battery. It allows a tenfold production of energy as compared with graphite. Unfortunately, when used in contact with a liquid electrolyte, metallic lithium leads to the formation of uneven metallic lithium deposits during the recharging process likely to cause short-circuits and even an explosion.” Solid polymer electrolytes would therefore be a perfect solution to avoid these safety issues and they would also allow the miniaturisation of systems and an increase in the energy density.
The first laboratory prototypes feature very good energy cycles. An industrial prototype should be delivered within the next couple of years. Definitely something worth keeping an eye on…