First Unite! Spring School brings together 70 students from all over Europe to discuss Sustainable Energy

Last May, 11 students from Grenoble joined 60 others in the first ever Spring School, organised online by Politecnico di Torino, our Italian Unite! partner. Read on about this international event, focusing on the theme of tomorrow’s energy and listen to individual reactions from Grenoble-INP UGA participants.

From 17th-19th May, Politecnico di Torino hosted the 1st Unite! Spring School. To celebrate this event, why not follow us in the company of two of the participants: Professor Jean Luc Schanen (Grenoble INP-Ense3 UGA & Manager of the "Virtual Mobility on Energy" pilot project and Eloane, a 3rd Year Grenoble INP- Ense3 UGA student, presently undertaking her end-of-study project at G2ELab* (Grenoble Electrical Engineering).

This 1st Unite! virtual Spring School was mainly aimed at M1 (or 2nd Year Engineering School) students with an interest in research internships or end-of-study projects in a laboratory of a Unite! partner, to be followed by a thesis starting in the 2022-3 academic year.

Energy was the central subject and viewed from diverse perspectives such as the new frontiers of energy, storage systems, fuel cells, intelligent networks and even the possibilities afforded by hydrogen, sustainable nuclear energy and bioenergy. These themes were explored during the 3 days, especially through the conference format.
“It was interesting that these conferences were led by professors from different universities […] who work either in collaboration or on subjects very similar to each other. It was easy to see the links that could be made between them and the working methods that they have developed” said Eloane.
In addition to the conferences, the Spring School programme proposed thought-provoking meals called “Business lunches” (one of which was organised by the EIT InnoEnergy Master School).

“Serious Games” were also offered by Politecnico di Torino students. Eloane’s reaction: “We were split up into groups of 8 students with whom we played these games. We were able to discuss the different issues that arose. This was the moment when we interacted the most with each other.” 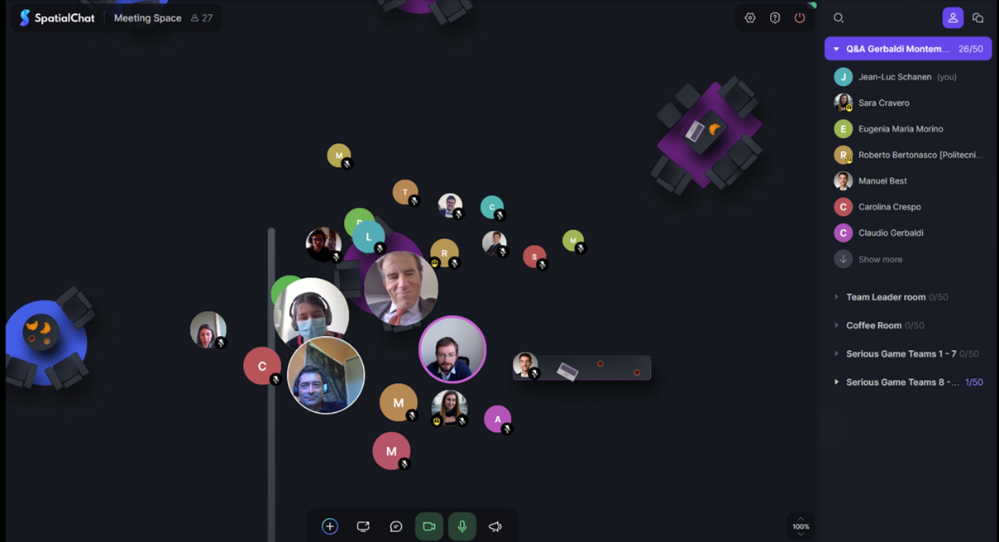 Being unable to hold a face-to-face event, the organisers chose to use innovative digital tools to encourage interaction between the participants. A prime example was the SpatialChat tool, a type of virtual pause in a space where all the participants met after the conferences. Eloane told us:
“You could hear what people were saying, ask questions, move away if you wanted to chat to another student – in which case the volume of the previous conversation lessened as you went away. This idea was really interesting and was put to good use during this Spring School.”

In spite of the health restrictions, Eloane felt a real sense of excitement among her fellow Europeans through the different exchanges she had. She added:
"Often, the students with whom I spoke had already planned a Semester abroad for next year and they were interested in an internship. They still haven’t lost hope in being able to travel.”  If similar events like the Spring School take place in person, Elouane confirmed her interest in attending!

Spring Schools: complex to organise but the promise of a bright future for collaboration within the Unite! framework

We asked Jean Luc Schanen to comment on the complicated organisation of this event.
“In the university system, the guiding principle is networking and conferences are a bonus whereas, online, the conference becomes practically the main interest and networking drops into the background: in consequence, the objective is totally inverted.” So, it was the Italian partner of the Unite! Alliance Unite! which organised this Spring School online, in spite of repeatedly failed attempts to change dates in order to try and keep it as an “in-person” event. Ingenuity was required to ensure all went smoothly at a distance – for example by introducing “Serious Games” (in which Grenoble-INP UGA collaborated).
“We pushed hard for the use of such games and Grenoble and Turin worked well together on it” Jean-Luc Schanen confirmed. He also stated that the organisation of such an event would have been impossible without the support of the Unite! Alliance.

“Summer Schools can always be organised but we could never have treated such a wide subject as this, nor dreamt of trying to create a call for students like this one, with partners already identified.”
Cooperation in the framework of this Unite! event has created a research community, which is establishing partnerships – an essential factor for the future of Unite! in order
“to identify the nuclei of research communities that will spark future collaborations that will prove very useful, for example in the context of H2020 projects.”