The "MIAI Grenoble Alpes" project to host an interdisciplinary artificial intelligence institute (3IA) was approved on Wednesday 24th April by the French State with a budget of 18.5 million Euros per year over 4 years. 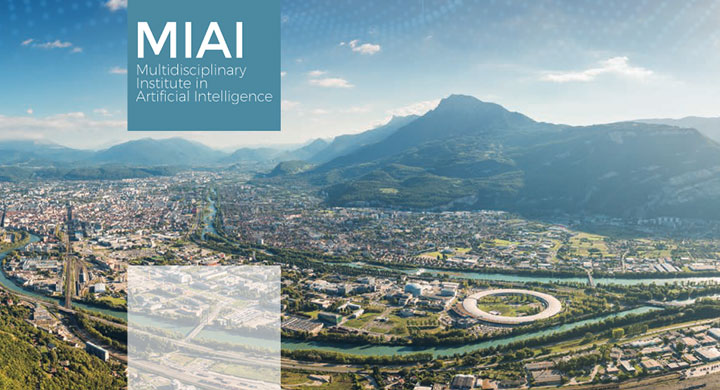 The MIAI (Multidisciplinary Institute in Artificial Intelligence) project aims to conduct research in artificial intelligence at the highest level, to offer attractive courses for students and professionals of all levels, to support innovation in large companies, SMEs and startups and to inform and interact with citizens on all aspects of AI.


Eric Gaussier, project coordinator and director of Grenoble Informatics Laboratory (LIG, CNRS/Grenoble INP/Inria/UGA): « It will be a multidisciplinary institute covering everything from hardware architecture to software, at the heart of artificial intelligence. It has evolved between pre-selection and the submission of the final application. It is now structured around two main themes: future AI systems and AI for human being and the environment. The former will address fundamental issues: Machine learning and reasoning; Hardware and embedded architectures for AI; Perception and interaction. The latter will address issues of AI uses and applications: AI and society; Health; Environment and energy; Industry 4.0. It is a multidisciplinary program in which data specialists, computer scientists, mathematicians, seismologists, doctors, sociologists, lawyers, philosophers, etc. will work in collaboration with companies and academic partners.»


No less than 55 companies have already contributed to MIAI with €5.8 million per year, including 23 large companies, 21 SMEs and 11 startups. This is a testament to the socio-economic world’s interest in artificial intelligence as well as the quality of the Grenoble ecosystem.


Training : Aiming to Double the Number of Students and Professionnals Trained in AI


700 students are currently being trained in AI at Université Grenoble Alpes and MIAI aims to double the number of students and professionals trained in AI and its applications within 5 years. MIAI will make it possible to create new courses, particularly work-study programs, and to promote individual career paths opening the way to an AI certificate awarded by the Institute. It will be divided into 2 qualifications: "Core AI" and "AI Applications". This will enable companies to increase their capacity to recruit as well as improve employee skills.


What are the Prospects for the Next 10 Years?


According to Eric Gaussier, « over the next ten years, we plan to contribute to the next stage of AI development, where the level of predictability, flexibility and explainability of systems will make their use easier for humans. Tools for collecting and merging large-scale data from various sources will be available with interactive systems that integrate a broader range of knowledge. We hope for breakthroughs in both the social and environmental spheres, particularly through reform of the health system with personalized, more effective and less invasive medical treatments. We also hope to provide ourselves with tools that will enable humanity to better monitor and protect its environment. Finally, we wish to improve the understanding of the interests and risks of AI development for human societies.»


The strengths of the Grenoble science community are based on an already widely recognized expertise.
In terms of research, more than 1500 researchers and teachers, doctoral students and post-doctoral fellows are working on AI with more than 1600 publications, 15% of which are published in the 10 journals and conferences of reference. In education, more than 200 Masters degrees are awarded each year. At the socio-economic level, the region has more than 100 companies and more than 50 startups with which we have many partnerships, particularly on the themes mentioned above.
In addition, Université Grenoble Alpes is ranked 1st among French institutions for science and computer engineering and 31st worldwide according to the latest Shanghai thematic ranking.
Since obtaining the IDEX status, Université Grenoble Alpes has embarked on a process of structuring and integrating the players in higher education and research in Grenoble by strongly involving economic partners and local authorities. The success of the Grenoble IDEX program reflects the region's desire to work together to meet the major challenges of today's society, including artificial intelligence.


The 3IA Call for Expressions of Interest


As part of the national program for artificial intelligence announced by the French President, the French State has decided to fund a limited number of research, training and innovation centers in this field, around which all of France's potential in this field will be organized. 4 sites have been confirmed (Grenoble, Nice, Paris and Toulouse) and these 4 3AI institutes will be accredited for an initial period of four years, with minimum funding under the PIA3 priority research program, which will be allocated €75 million. Taking into account equal co-funding by public and private partners, the funding that the 3IAs will leverage to carry out their research, training and innovation program will be to the tune of at least €225 million.