Three students from Grenoble INP – Ense3, UGA, have launched a project to help decontaminate Nepal’s highest mountaintops. They have developed a unique solution for handling plastic waste and set off to test it in the field. 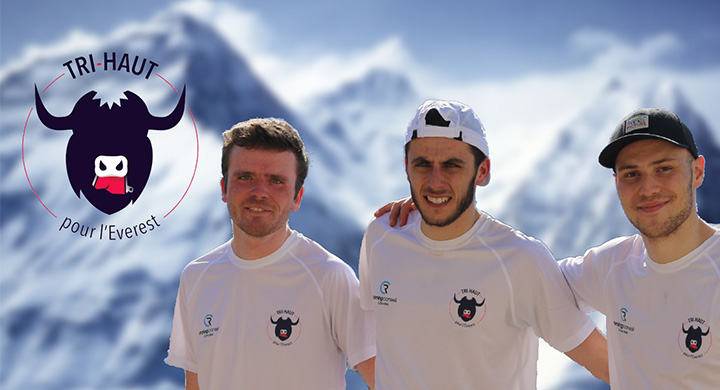 If you’re a mountain-lover and Grenoble INP – Ense3 student that’s been made aware of environmental issues, what’s something useful you could do? Why, help clean up Everest! Such was the mindset for students Olivier Robelin, Robin Jager and Valentin Girard when they created the organisation “Tri-Haut pour l’Everest”. “We got the idea after watching the documentary Everest Green by Jean-Michel Jorda,” explains Olivier Robelin, currently on a leave of absence after his second year at Grenoble INP – Ense3 “We contacted the director to talk about our waste processing project for the region, and he loved the idea!”

Mt Everest is located in the Khumbu region and is a destination for many high-altitude treks that leave behind large amounts of rubbish, like all the high peaks in the area. However, Nepal does not have the infrastructure required to process such waste. “Despite the efforts made in the past decade to limit pollution in base camps, there is a lot of non-recyclable waste that ends up straight in Nepalese rivers,” explains the future engineer. “The aim of our mission is to fill this void by creating infrastructure that could be used to process waste throughout the entire valley.”

Currently, rubbish is collected at base camp, and some paths have garbage bins. But it is not all collected, far from it, and most of what is picked up is not sorted for recycling. Waste that can be incinerated represents nearly 40% of all rubbish, and the vast majority ends up in garbage pits or as litter, even if there is an undersized incinerator run on fuel oil.


Pyrolysis to the rescue


The future engineers had the idea to fill this void by developing a low-carbon incinerator to burn abandoned, non-recyclable rubbish. For this, they drew on the principle of pyrolysis. “This principle involves combustion without oxygen, which is low at these altitudes,” explains Olivier Robelin. “The reaction produces gas which provides a self-sustaining energy supply, and fuel oil to be reused by the local population.” Multiple solutions were investigated in collaboration with industrial partners during their first-year project, in order to guarantee optimal performance at a reasonable cost. Prototypes were developed at the school’s FabLab and will soon be tested on the ground. “In the end, we developed a prototype of a pyrolysis tool that transforms plastic waste into fuel oil and gas.”

The three students recently left for Nepal for 4 months, where they will continue to develop their project in a laboratory in Kathmandu. At the same time, they will work with Nepalese partners to raise awareness among the local population of the importance of collecting and sorting waste. When they return, they will pass on the baton to members of NGO Solidarire, who will send people to continue the project on the ground for at least 2-3 years.