Grenoble Institute of Technology’s Esisar school will challenge the best young European hackers and Protectors to a Vital Field of Study.

The world’s largest student-run set of cyber security games, founded 14 years ago by the New York University Tandon School of Engineering, will expand this year to Europe, where it will be hosted by Grenoble INP - Esisar. Based in Valence, France, Esisar is one of six engineering schools of the Grenoble Institute of Technology (Grenoble INP, located in Grenoble).

Last year the New York University Tandon School of Engineering joined with NYU Abu Dhabi and the Indian Institute of Technology, Kanpur to widen the annual Cyber Security Awareness Week (CSAW) games beyond Brooklyn, New York, by staging simultaneous final rounds for students in the Middle East, North Africa and India. This year’s CSAW will be held at all four regional hubs on November 9-11, 2017.

Esisar faculty and undergraduate and graduate students will collaborate with student challenge leads at NYU Tandon to organize the European CSAW finals in Valence, France. The challenges will be open to students from any European country with support for finalists’ travel and accommodation.

Demand for cyber security experts in Europe — where telecom, manufacturing, government, and financial services sectors in particular face mounting security threats — is increasing and will be further driven by implementation next year of the EU General Data Protection Regulation, requiring companies to disclose data breaches.

“Europe needs many more cyber security experts to face current and future threats and to fill what is expected to be a major dearth of skilled defenders,” said David Hely, associate professor of computer engineering at Esisar. “We are pleased to partner with New York University Tandon School of Engineering to bring cyber security competitions of this magnitude to France, and to raise awareness of — and spark an interest in — this critical field among students from all over Europe.” 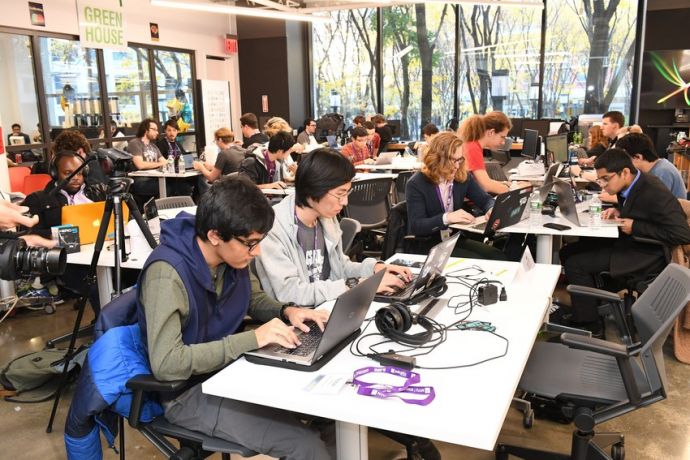 Students competing in the 2016 CSAW competition at NYU Tandon
At Grenoble INP - Esisar, CSAW events will include:


This year the best students from the four regions will earn travel awards to participate in final rounds at one of the hubs. There, students will network with top professionals who serve as judges, hear experts address emerging issues, meet recruiters eager to fill what is expected to be a shortfall of 1.5 million cyber security professionals by 2020, and face tough competition from teams from other schools.

The CSAW games were founded in 2004 by NYU Tandon Computer Science and Engineering Professor Nasir Memon and his students. Students continue to design the contests under the mentorship of information security professionals and faculty and run them from NYU Tandon’s student-led Offensive Security, Incident Response and Internet Security (OSIRIS) lab, home also to weekly student-led Hack Night training and student research.

“We are pleased that Grenoble INP - Esisar, a world-leading engineering school, is participating in CSAW to engage and educate information security students and introduce the contests to students throughout Europe,” Said Memon, who also heads NYU Abu Dhabi’s cyber security program.

“Esisar, which has been a top competitor in the Embedded Security Challenge for several years, clearly appreciates how all of CSAW’s contests have the capacity to introduce a new generation of European students to information security,” said Ramesh Karri, professor of electrical and computer engineering at NYU Tandon. “We couldn’t be more excited about this partnership.”

Winners of the final rounds can walk away with cash prizes, scholarships, and more. Bragging rights are often the biggest motivator — CSAW has become a boldface line for recruiters and university admissions officers.

CSAW welcomes the support of corporate and governmental sponsors. For more information, visit csaw.engineering.nyu.edu, view a video of CSAW 2016 highlights, and follow @CSAW_NYUTandon.

Note: Images from the 2016 CSAW finals can be found here

About the New York University Tandon School of Engineering
The NYU Tandon School of Engineering dates to 1854, the founding date for both the New York University School of Civil Engineering and Architecture and the Brooklyn Collegiate and Polytechnic Institute (widely known as Brooklyn Poly). A January 2014 merger created a comprehensive school of education and research in engineering and applied sciences, rooted in a tradition of invention and entrepreneurship and dedicated to furthering technology in service to society. In addition to its main location in Brooklyn, NYU Tandon collaborates with other schools within NYU, the country’s largest private research university, and is closely connected to engineering programs at NYU Abu Dhabi and NYU Shanghai. It operates Future Labs focused on start-up businesses in downtown Manhattan and Brooklyn and an award-winning online graduate program.