Clément, 26 years old: searching for the Wi‑Fi of the future

Clément Jany, a young doctor who did his PhD in Optics and Radiofrequencies (OR) at Minatec, CEA Leti, under the supervision of Philippe Ferrari from the IMEP-LAHC laboratory, won the award for the best article during the European Microwawe week that was held in Rome (Italy) from 5 to 10 October and which brought together approximately 1,400 attendees from across the globe. This is the second largest international conference on this subject, following the yearly conference held in the United States. 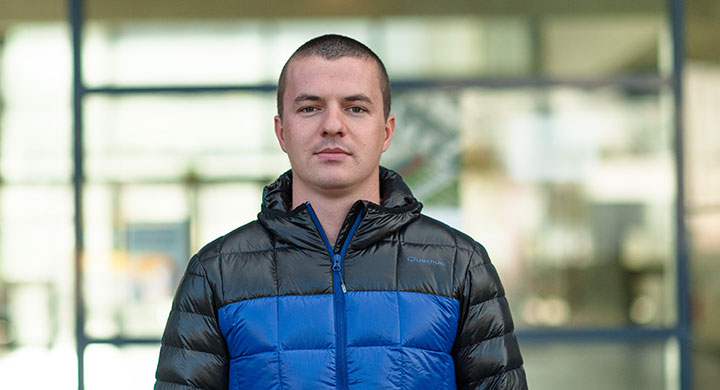 Clément Jany’s article was selected from amongst 478 papers and received the “microwave award”. Two other awards were presented to young engineers, young people under the age of 30 like himself.
Clément firstly gave an oral presentation of his work before being informed that he had been short-listed and that he was likely to receive an award during the closing ceremony. He confided to us that he had initially thought that he would be granted an award in the “young engineers” category and was therefore pleasantly surprised when he won the award as an ordinary researcher.

This article included some of the results obtained during his thesis, for which he did his viva voce on 16 September 2014. Clément worked on the high-speed telecommunication systems as part of his research project. The goal was to find alternative solutions to Wi-Fi and to other short waves (for example Bluetooth) in order to address the challenge of the increasing data transmission rates in the coming years. This work focused on low-cost technologies and these innovative technologies will be aimed at the mass consumer market.

Potential future applications of this work

The work is intended to be used in the systems that will replace Wi-Fi and will prepare the future 5G, or even 6G, in the years to come. Another short-term application is to be able to transmit uncompressed HDMI (High Definition Multimedia Interface) signals. As a matter of fact, HDMI, which transmits video signals in particular, requires an excessively high speed to be wirelessly transmitted by waves with the currently available technologies. This work is carried out at 60 GHz frequencies, making it possible to attain the required transmission rates, whereas the current telecommunications systems operate at a few GHz; Wi-Fi, for example, operates at a frequency of 2.4 GHz.

After obtaining a Baccalauréat (A-levels) in Industrial Technology and Science, Clément did an engineering school preparatory class in Industrial Technology and Sciences before going on to ENSEA (Ecole Nationale Supérieure de l’Electronique et de ses Applications), a graduate school in electronic engineering, computer science and telecommunications located in Cergy, in the Paris region. After that, he went to the Grenoble metropolitan area to carry out his End-of-Study Project (PFE - Projet de Fin d’Etudes) at CEA Grenoble in a radiofrequency laboratory. He then decided to do a thesis at CEA LETI in partnership with the IMEP-LAHC laboratory.
Upon completion of his thesis, Clément was hired under an open-ended contract at CEA to work on radiofrequency systems: “My former supervisor is now my colleague!”

Interview with Clément Jany (in the presence of Philippe Ferrari, his thesis supervisor)

What message would you like to convey about your career path?
“I really enjoyed doing my thesis in the CEA – Grenoble INP environment. I worked with very dynamic people; it was a truly great experience! I’d like to send a positive message to young engineering students, to the young people here [at Grenoble INP – Phelma], as this is really how my experience went and I’d like to encourage them to continue on this path”, raved Clément.

Philippe Ferrari, his thesis supervisor at the IMEP-LAHC laboratory, added: “It is important that there are good engineers who do theses as there is not a strong enough link between research and engineering in France. The companies, in particular SMEs, very often do not know very much about the field of academic research, as opposed to Germany where the context is completely different as three quarters of the heads of SMEs have done a thesis and hold a PhD.”

Has it always been your intention to do research?
“When I started engineering school, I was already fascinated by research, physics and fundamental research even if I knew only as much about it as the average student. It was especially after doing an internship at CEA that I decided to continue towards doing a thesis.”

Why did you choose Grenoble?  Was the environment here a decisive factor?
“I am from Rodez, Aveyron. I did my preparatory class in Brives la Gaillarde, my engineering school at Cergy and my End-of-Study Project and thesis in Grenoble.
I used to ski before I came here and I continued and I also started climbing and mountain sports. This sports-oriented mountain environment was what made me choose Grenoble for my internship as I was also accepted for an End-of-Study Project in the Paris region but I decided to come to Grenoble.”

So, is Grenoble better?
“Yes! But don’t tell the people from Rodez that I said so!”

Do you think you will teach along with being a researcher?
“I tried teaching during my thesis at Grenoble INP – Esisar. Furthermore, I already take on trainees and during my thesis I had co-supervised some trainees alongside my manager. These students were from Grenoble INP - Phelma and were doing their End-of-Study Project.
Lecturing was a very great experience, however it is a lot of work and I didn’t imagine how much, especially in the first year. I had an initiation course for apprentices with lectures, tutorial classes and practicals. It was a huge amount of work to prepare my lectures but it was very interesting and I really liked the contact with the students, it was really good.”

What do you think are the advantages of doing a thesis?
“The advantages in my opinion are that you are free to decide on your work approach and how you are going to organise yourself from a practical standpoint as well as in terms of what direction your work is going to take. You organise your days as you wish, you explore the avenues that you wish to and it is really satisfying and captivating. It is also a time to travel; I visited the United States and Italy twice. For me, it was an opportunity to meet people, to work on projects, to work in a team, to teach. I would really encourage young people to do a thesis by beginning at an End-of-Study Project in a research environment, as this is a good way to see whether or not you like research and help you decide if you really want to make it you career choice.”